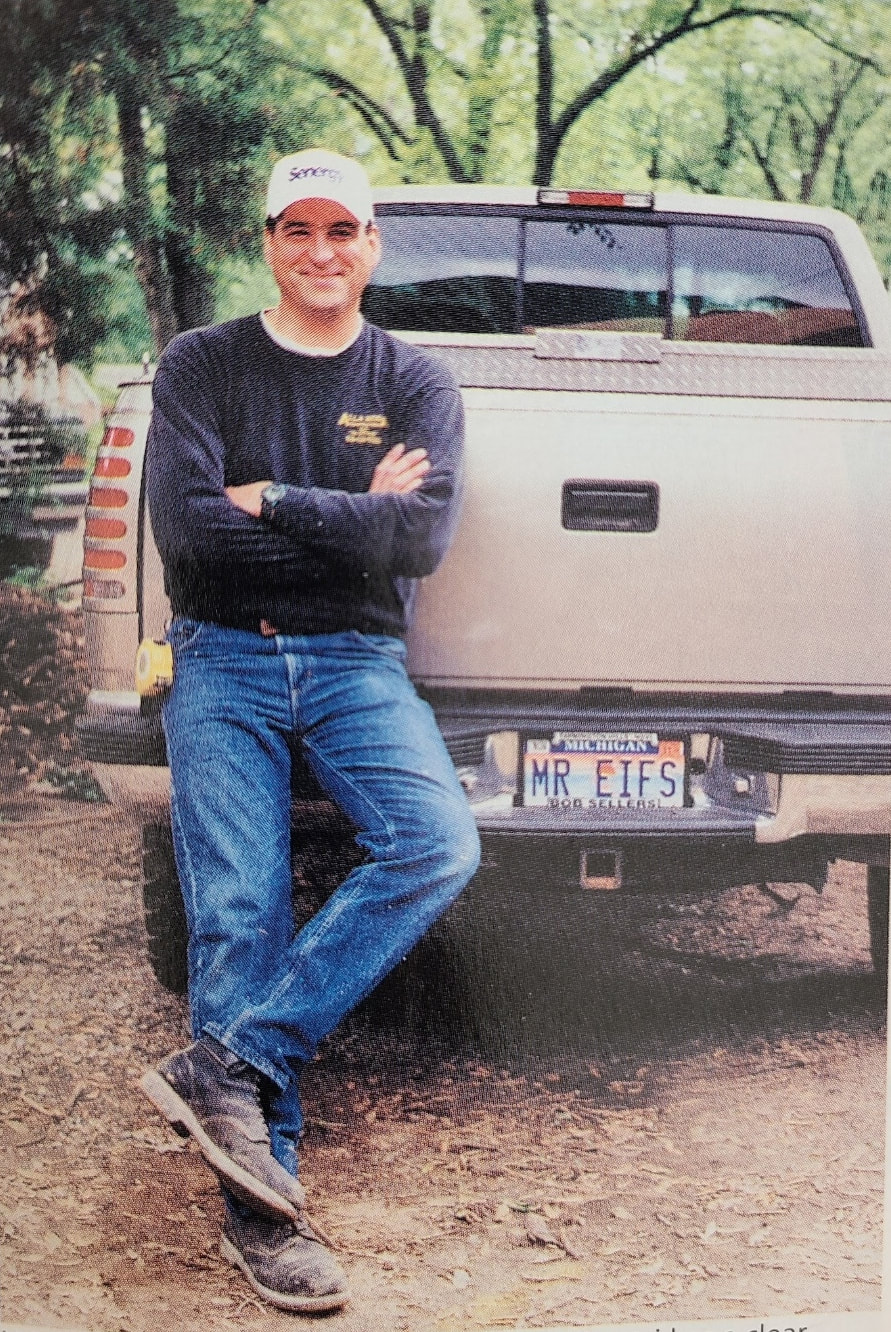 Roll on the Wrap
Liquid building wrap offers advantages for contractors and owners.

The trend toward using weather barriers as a secondary line of defense against incidental moisture intrusion behind exterior wall claddings continues to grow, particularly in Type 5 and residential construction using wood studs and sheathing.Using conventional building wrap or felt creates several additional tasks for the EIFS installer: tightening of loose paper, taping of ripped seams and being vigilant that another tradesman completed the attachment properly. When forced to rely on other trades to mechanically fasten the paper, the EIFS subcontractor loses control of this critical application component, while inheriting the responsibility of providing the client a properly functioning system.

When Bob Silvestri (a.k.a. Robert D. Silvestri), was bidding on a residential EIFS job, it was the choice of continuous waterproof coating that helped him nose out his competition. Not only did he like the idea of being in total control of the application process, but he also liked the fact that all the critical system components could be applied and warranted by a single manufacturer.**

“Normally, we don’t put the paper (such as Tyvek) on,” Silvestri says. “Many times, the paper is installed by a contractor who is not intimately familiar with the application of an EIF system, hence, he or she may not be as sensitive to proper tolerances and required application methods.”

How it works:  Building paper is typically mechanically fastened to the substrate with staples. The insulation board component of the EIFS must then be mechanically fastened through the building paper into the substrate as well. The cumulative effect of all these penetrations can reduce the ability of paper or fabric to resist moisture and protect the substructure.On this residential project—with a wood substrate—the Gold Guard system, manufactured by Sto Corp., was chosen. The two-component system consists of trowel-applied elastomeric joint compound called Gold Fill to bridge the gaps of the sheathing joints and rough openings. Next, a waterproof coating called Gold Coat is roller-applied over the entire sheathing surface. Both components are premixed and ready to use, designed for a higher degree of quality control in the field.

“One of the main differences between this system and construction paper is that holes are no longer penetrating the substrate,” says Ben Fredal, regional account manager for Sto-Ex Inc., of Troy, Mich. “With paper, the holes you put in the substrate to attach it become a potential source of moisture intrusion. With this system, all penetrations have to be through the substrate before the liquid wrap is applied. Thus, any penetrations are covered and sealed by the liquid.”

The result of this system is a continuous, waterproof membrane bonded directly to the sheathing to reduce water penetration, air infiltration and wind pressure. The system is compatible with gypsum sheathing, plywood, OSB and cement board. The system is also finding use as a second line of defense against the elements behind other claddings, including brick, siding and masonry.

More control:  Giving the EIFS contractor complete control over the weatherproofing step allowed for fewer unpleasant surprises. Silvestri points out the unfortunate fact that sometimes building paper is relied on to hide flaws that may not become evident until they are discovered by the exterior cladding contractor that follows the trade that put on the paper. Improper fasteners, non-compliant fastening patterns, nails that miss studs, or missing floor bonds if I-joists are being used are no longer hidden by paper with the liquid system.“The liquid method gives the EIFS contractor more control of the project,” Silvestri adds. “Any potential deficiencies can be corrected before the exterior cladding is applied because we can now see and work with the substrate. We can see what’s there, know what we’re dealing with and help the customer avoid any additional surprises.”

Although there is no substitute for proper design, flashing and sealant details, to keep water out, incidental moisture intrusion can be accommodated by this liquid system without jeopardizing the integrity of the underlying structure, according to Silvestri.  By incorporating a starter track with weepholes at the base of the EIF system and vertically orienting the ribbons of adhesive between the Gold Guard-protected substrate and the insulation, any incidental moisture that may penetrate the system is diverted down and out before it has any opportunity to damage the system.

The system, being relatively new, does require some learning on the part of the EIFS contractor. However, the learning curve is not steep, according to Fredal.

“The majority of our installers are walls and ceiling contractors familiar with the mudding, taping and priming of drywall,” he says. “The tools and techniques utilized for this application are essentially the same.”

Currently, there are no existing recognized codes to evaluate products other than building papers as secondary weather barriers. However, under rigorous testing such as AATCC-127 hydrostatic pressure water resistance, the Gold Guard system was found to resist water penetration more than five times longer than the leading brand house wraps and more than 28 times longer than conventional building paper, according to Sto-Ex.

“Although long-term performance cannot be determined until some time has passed, EIFS contractors can take heart in the fact that with liquid waterproof coating, they can take more control of their own projects,” Fredal says.

Founded in June 1981 by Rick Huemphfner, Sto-Ex has been Sto Corp.’s largest distributor for four straight years, and is the oldest EIFS distributor in Michigan and one of the oldest in the United States.

Eighty percent of the company’s projects are commercial, and some customers have run more than 5 million square feet of EIFS. Some of the company’s customers' notable projects include the interior of Tiger Stadium, Detroit's MGM Casino, Motor City Casino and Great Lakes Crossing mall.

What is the secret to longevity, especially in an industry that has had some difficult moments of late?

“We only deal with the top tier of contractors,” says Ray Redmond, sales representative for Sto-Ex. “This has always been our goal and I believe we have not had some of the problems the industry has had for this reason.”

Contractors are properly trained through Sto-Ex and contractors’ track records are scrutinized closely.

“Attitude is very important,” adds Redmond. “We make sure we aren’t dealing with guys that just want to throw and go. They need to show concern for doing things right, not just with our trade, but with coordination of products, with the other trades and their products, and the other subs.”

Another highlight in the company’s history is the longevity of its customer base.

“Most of our customers have stuck with us because we operate with a good set of ethics and business morals,” Redmond says. “We make it clear that we are in it for the long haul, concerned not only with our success but their success.”

Although a shortage of skilled tradespeople continues to be a challenge, Redmond believes the future of the EIFS industry is looking better.

“Yes, there are limitations to a standard-barrier, face-sealed system, especially in type 5 construction,” he adds, "but the introduction and improvements of double barrier/drainage systems will tolerate less-than-perfect construction from all trades.”

**Disclaimer:  Original article spelled Mr. Silvestri's name incorrectly as "Sylvestri".  Mr. Robert (Bob) Silvestri is no longer the owner of Alla Moda Construction, Inc. as listed in the article, but has since sold that company and now owns RDS Construction, Inc. in Northville, MI.  You can contact him at 248-202-2615